When I set a goal earlier this summer to summit 15 peaks in 2015, I wasn’t really sure if it would happen. Then one after another, I started checking them off. With each peak came an increased motivation to get the next and the next. Since I started on May 31st, I have managed to check 14 peaks off of my list. Each one is a different experience and none have ever disappointed.

Yesterday, I grabbed peaks 13 and 14 with a solo adventure that was interesting and exhilarating, to say the least. I summited South Camp Peak and Genoa Peak, which are both accessible from the Tahoe Rim Trail. One day I would love to do the entire Rim Trail, but until then, I will settle for some awesome out-and-back day hikes on this well maintained and beautiful trail.

The trailhead that I started from yesterday morning is located off of Highway 50, across from Spooner Lake. If you are coming from Incline Village, take Highway 28 South until you reach the junction for Highway 50. Turn left on 50, drive about a 1/2 mile, and the trailhead will be located on the right (South) side of the highway. There is plenty of parking here, but it can get really busy in the summer months. I would suggest you get to the trailhead early to make sure you get a spot and also get your hike in before it heats up too much.

I got to the trailhead at around 9:15 and started my climb. Immediately from the parking lot, you begin up some steep switchbacks for about a half mile. From there, the trail mellows for a little bit and after two miles, you will cross Genoa Peak road. You can take the road and the Rim Trail will eventually intersect with it again, but I would suggest that you just stay on the Rim Trail the whole way. It is much more scenic and you won’t be inhaling dust from the occasional 4-wheeler. After about another mile on the Rim Trail, you will cross over Genoa Peak Road again. Stay on the Rim Trail (there is a sign for “Lakeview” in 2 miles) and you will begin up another set of switchbacks.

This part of the trail has incredible views of Lake Tahoe the entire way up. After 2 miles, the trail will open up and bam! South Camp Peak is in your face. At first I was thinking to myself, “this can’t be the peak.” Of all the peaks I have climbed this year, there is a point where you are making your final ascent and you know the peak is coming. This one completely took me by surprise, but I was definitely happy to reach it. At the top, it was incredibly windy and cold, but the view was amazing. One of my favorite things about climbing to the top of a new peak is seeing all the other peaks that I have been on this year. I could see Tallac, Pyramid Peak, Jobs Sister, Freel Peak, and Mt Rose, to name a few. I could also see Genoa Peak about a mile and a half away. I decided I needed to go for it. 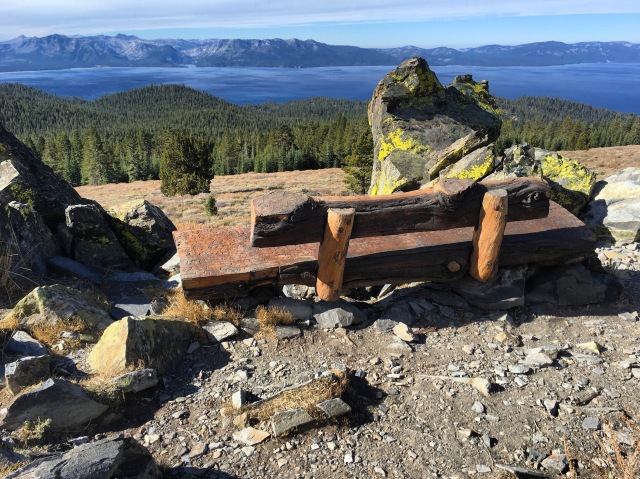 Best seat in the house – “The Bench”

It had taken me about an hour and a half to get to the summit of South Camp Peak, but I was hustling and didn’t take any breaks because my time was limited with a 2:30 tee time with my mom. At this point it was 10:45 and I knew if I could summit Genoa Peak by 11:30, I would be okay on time. I headed South on the ridgeline and was so excited the whole way. I am pretty sure that I said “wow” a gazillion times. The ridgeline is so spectacular… and then you get to this amazing bench! I could have kicked up my feet and stayed there all day if I had time. It is definitely the best seat in the house.

From here, you enter back into the forest and I lost sight of Genoa Peak. I soon came to a fork in the road and pulled out my map to see which way to go. I decided to go left on Genoa Peak Road, since it appeared on the map that there would be an offshoot up to the peak in about a quarter mile. Well, there wasn’t. I kept walking and walking and eventually gave up hope. I didn’t think that the peak was in my cards for the day. I kept going down the road, since it looked like it would eventually take me back to the Rim Trail. That is when I saw a road veer up to the right, where I thought the peak would be. At this point, it was 11:30, but I decided I had to check it out. I am so glad I did. I soon found myself winding up the side of Genoa Peak and the top was in view. This peak might not be the most attractive peak because it is covered in electrical equipment, but the views are amazing nonetheless.

I got to the very windy summit (probably 100 mph gusts that almost took me out a few times) and it was about noon. I was a half hour behind schedule at this time and knew that I had to make a run for it if I was going to make my tee time. I started running down the mountain, took a right on Genoa Peak Road and continued on for about a mile and a half.

That is when the worst thing that could happen, happened. I came to a dead-end. WTF map?!? According to my map the road should have taken me all the way back to the RIm Trail. At this point, I wasn’t sure what to do. I didn’t want to back track, because then I NEVER would have made my tee time.

So, I did pretty much the stupidest thing you can do when you are hiking by yourself. I kept hiking even though the trail dead-ended. I knew the general direction of the lake and that I would eventually either hit the Rim Trail or Highway 50 and could hitchhike back to my car. I hiked off trail for about a half a mile and was starting to get a little worried that I had made a wrong decision, and then…I saw the trail. It was the best thing I have seen in a while. I was not going to make the 5 o’clock news as the girl who was missing in the woods.

Once I was back on the trail, I picked up the pace. I had about 50 minutes to go about 4 miles and still make it to the golf course. My backpack was annoying me the entire way (I hadn’t planned on having to run!), but I made it back to my car with just enough time to drive back to Incline Village, change at Superman speed, and get to the golf course.  What a freaking awesome day!

I only have one peak left to do!!! I am planning on getting it this Saturday, which also happens to be my bday! I can’t wait to check this awesome accomplishment off my list. And who knows, there might even be a little champagne that accompanies me up to peak #15!