Pyramid Peak. It has been on the top of my list for the past few months. I attempted it once several weeks ago, but couldn’t go because of a fire that had closed the road to the trailhead. Well, this past weekend, I officially checked that one off of my list. At the same time, I added one of the most pride-filled moments I have had in a long time.

The weekend started with taking Friday off and heading out backpacking with my big brother. It was the first time that I had been backpacking with him and was totally looking forward to some brother/sister time (especially since we now have something in common after years of being typical siblings that thought the other one was retarded. kids). We began at Lyons Creek Trailhead off of Hwy 50. To get there from South Lake Tahoe, take Hwy 50 for 15.75 miles to Wrights Lake Road. Take a right on Wrights Lake Road and follow it for about 3 miles to the Lyons Creek Trailhead.

My brother and me starting out at the Lyons Creek Trailhead.

A couple of things to note. This trailhead is largely inaccessible in the winter because they do not plow Wrights Lake Road. If you are planning a Spring trip, you might want to call the Forest Service in advance to make sure it is open. Which brings me to my second thing to note. Lake Sylvia is located in Desolation Wilderness and you need a permit to hike/camp here. You can secure one online here. During the busy summer months, make sure to get one well ahead of time.

Once you park at the trailhead, you will follow the trail for about 4.6 miles to Lake Sylvia. The trail is mostly a gradual uphill with some rocky sections. Over the course of the 4.6 miles, you will climb about 1,300′ to the lake. All-in-all, it took us about an hour and 45 minutes to reach the lake, but my brother also has a pretty quick pace I had to keep up with!

We set-up camp on the South end of the lake and were the only ones when we arrived. A couple of older men set-up camp a little later in the afternoon, but we never saw them after that. That afternoon, my brother went and scouted the route up to the ridgeline where we would be adventuring the next morning to get to Pyramid Peak. I watched him from my hammock and was thinking the entire time, ‘this is crazy….’ He was a tiny speck in a huge, steep rock field. What did I get myself into?! 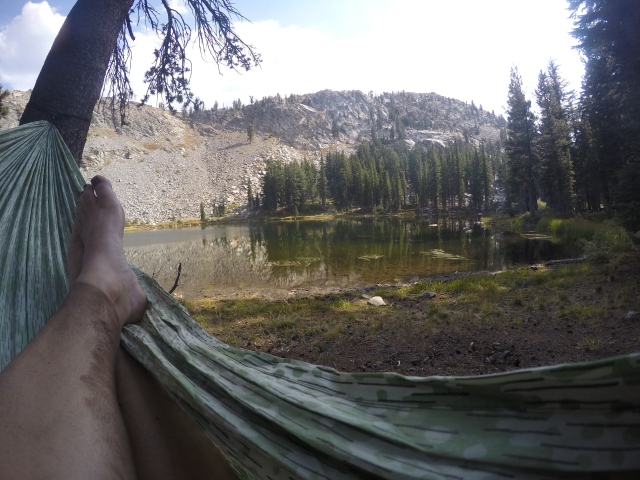 Trying not to think about the ascent up to the ridgeline. Don’t mind my super dirty legs.

After a night of not really sleeping (there is something about sleeping in a tent alone in the middle of nowhere), we woke up at 6:30 and started our hike up to Pyramid Peak at around 7:00 am. I knew it was going to be tough, with about 2,000′ of elevation gain in a little over a mile. I run a lot and pride myself in having more strength and endurance than the average bear, but holy smokes. This was no joke. Getting up the ridgeline from Lake Sylvia requires some serious rock scrambling up very loose and steep rocks. Once you finally get to the top, which feels like forever, take the trail up the ridgeline to the West (left). From here, it will be mellow for a little bit and then begin another ascent. There is a little bit of route-finding required, but it isn’t anything too crazy at this point.

About halfway up the ridge, my brother decided that it would be best if he didn’t continue on. He came down with what was likely a stomach bug and knew that he would need to leave some reserves in the tank for the hike back down the ridge and backpacking out. I decided I had to carry on and left him laying on the side of the mountain. Poor guy! From there, I was on my own. After another steep ascent on the trail, I made it up to where the trail ends and you are faced with a wall of refrigerator-sized pieces of granite. I think I may have used a few colorful words at this point.

I hadn’t come all this way to just look at it, so I went for it. And went for it I did. From this point, you are using your hands and climbing up the summit for what is probably a good quarter of a mile. There were a few false summits where I would again, use some choice vocabulary. I finally got to the real summit at 8:45 and had the entire place to myself for a few minutes, until I was joined by a local from South Lake and his beast of a dog that made the trek. They had come in from the Rocky Canyon route. I still have no idea how that dog scrambled up all those rocks… 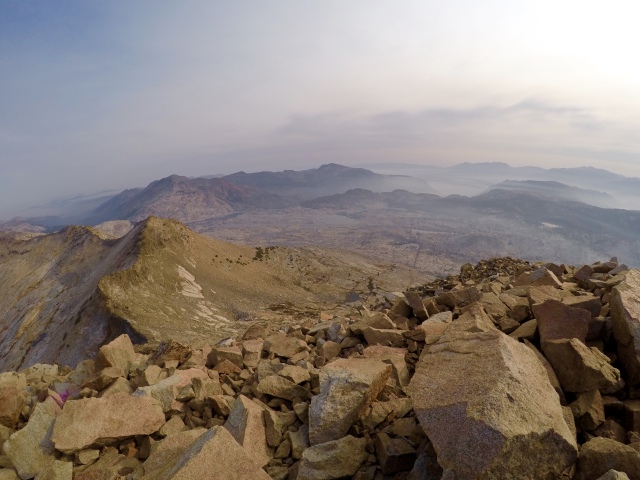 Enjoying the view from the top of Pyramid Peak, looking Northwest. Smokey, but still amazing. You can barely make out Lake Aloha in the foreground and Lake Tahoe is covered in smoke behind that.

Unfortunately, the view from the top was full of smoke and haze from some wildfires burning in California, but I still felt like I was standing on top of the world. Pyramid Peak sits at 9,983′ feet above sea level and dominates the Crystal Range in Desolation Wilderness. As I was standing on top of the peak and taking in the view through the smoke, I was full of pride.  Not only had I made the summit by myself, but it was also the most technical and challenging summit to date. There are no words to describe the feeling of conquering something, that at times, seems so insurmountable.

After about 20 minutes of enjoying what I had just conquered, I made my way down to make sure that my brother was still alive where I had left him laying. He rallied and we made the climb back down to Sylvia where we relaxed for a bit before breaking camp. Despite the smoke, illness, and crazy climbing, we both agreed that it was a great weekend. I would do it again in a heartbeat. Oh! And this makes 8 out of 15 peaks I have for a goal this year. I am running out of time, but I am still bagging them when I can.

Because the hike was so technical, I couldn’t take a lot of video. That would have just been dangerous. I did manage to get together a few clips though so you can get a better feel for how steep it is. I wouldn’t recommend this hike for the novice hiker, but if you think you are up for the challenge, check out the video below!

There was an error retrieving images from Instagram. An attempt will be remade in a few minutes.