It’s officially over. School starts this week and I will no longer be able to just pickup and go on weekend adventures. This semester I’ll have classes on Thursdays and Saturdays. Really!? Who creates a Saturday class? It’s a topic that I am really excited about though (Mindful Leadership), so I guess I’ll put up with it. Luckily, it’s not every Saturday, so I’ll still be able to sneak off on a few weekends here and there throughout the Fall to do some exploring.

Looking down on Star Lake by our bear bag. Freel to the right and Jobs Sister to the left.

This past weekend, I had to get one more trip in before it’s back to the books. My friend Jenn and I headed out to Star Lake with the intention of bagging Freel Peak, Jobs Sister, and Jobs the following day. My brother was originally going to come, but ended up coming down with a cold at the last minute. So it was just us two girls off to do some exploring.

We decided to take the route to Star Lake that starts off of High Meadow Trail. To get there from South Lake Tahoe, take Pioneer Trail and turn on High Meadow Trail. Follow the road all the way to the end and it will turn into a dirt road. Continue on the dirt road for about a half a mile until you reach the trailhead and Forest Service gate. There is a small parking area here, but we also saw cars parked on the side of the road. Also, there is a sign at the beginning of the dirt road that says passenger vehicles are not recommended. Disregard this sign. My little Subaru did perfectly fine.

From the trailhead you are going to start on a Forest Service road for about two miles. I would highly recommend trying to do this first thing in the morning. The trail is exposed and really hot in the summer. After two miles of going straight up the road (no joke), you will see a trail to the right and a white trail marker that has Star Lake written in Sharpie on it. Follow the trail and it will soon become a single track and you will continue to climb. It is a pretty burly hike. I don’t have a fancy GPS or anything, but looking at a map, it appears you gain about 2,800′ feet all the way to Star Lake. I was definitely wishing that I had packed a little lighter! 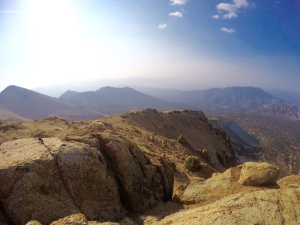 View from Jobs Sister. Freel is to the left. Stupid smoke from wildfires was killing our view.

The single track trail winds through the forest and passes a couple of creeks. It is a really pretty trail and we even saw two bald eagles circling overhead. After what seems like forever (you’ve been hiking for about three hours at this point) and wanting to curse your pack, you will come over a little hill in the trail and Star Lake is right in your face. The lake is absolutely stunning with Jobs Sister serving as a magnificent backdrop. It is gorgeous! We wandered around to the left of the lake and setup camp. There was one other couple when we got there, but you couldn’t see them from our site. A few others moved in over the course of the evening and I could imagine this lake getting really busy during the peak summer months.

We got there around 5:00 and did a little fishing, but didn’t catch anything. The next morning though, we did catch a little rainbow. That morning we hung out around camp for a while, did some swimming (it might be the coldest lake I have been in!), and got motivated to go peak bagging. We headed out on the right side of the lake, which is part of the Tahoe Rim Trail. From here it is about 3 miles to Freel Peak. Stay on the Rim Trail and you will see a sign for the summit in a couple of miles. We made it to the summit about 2 hours after leaving camp and then decided to head over to Jobs Sister, which is about one mile away. Go down the back side of Freel Peak, across the saddle and up to Jobs Sister. From there, we really wanted to get Jobs, but it was about 5:00 pm at that point and we wanted to get back before it got dark. Not wanting to go back the way we came (up and over Freel), we took a less traveled path down the middle of the saddle and did some offroading until we met back up with the Rim Trail.

Jenn and I in the saddle between Freel and Jobs Sister (to the left). ‘Merica!

We got back to camp at about 7:00 and quite a few people had moved in. There was one large group from the Sacramento area and a couple of guys who were on horses (Brokeback Mountain, anyone?). We had a nice evening, drank our boxed wine, and hit the sack pretty early after an exhausting day hiking. The hike down the next morning was equally as taxing on the muscles and I have definitely felt it on my runs this week. Only three months till my marathon. It’s go time!

Happy Valentine’s Day to the one who makes me smile the most. So glad you don’t get mad when I take a drink from your beer by “accident.” Mi amor!
Lovely weekend with my man, heart arch, and our new adventure truck!
Trying my hand at watercolor. @whitleyh2ocolor makes it look so much easier than it is!
Definitely worth getting up early for this and the dolphins. #sunrise #dolphins
Loved ones were lost this year, adventures were limited due to the pandemic and a herniated disc, and we made a big move from our beloved home in Tahoe to So Cal to help with my dad. All that being said, there is still always so much to be grateful for, and as gimmicky as these top nine posts may seem every year, it’s a good reminder that there is always something to look forward to. Count your blessings, love your loved ones hard, and be present in the moment. 2021, I’m coming for you and I can’t wait to see what this next year has in store.
Beautiful day for a quick trip to @joshuatreenps The skies were as whimsical as the Joshua Trees.